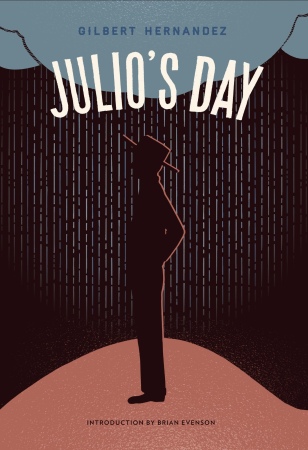 I somehow miss (missed) all the fun about Gilbert Hernandez' Locas and the rest of Love and Rockets – the one I did read was totally lame – so Julio's Day, his latest graphic novel looked attractive because it seemed very different from the main stuff – and ComiXology ad did its magic on me.

It's a 100-page long story about a Mexican American named Julio and the life of his family, beginning in 1900 and ending in 2000. A century in 100 pages – a book read in one sitting. However, parallels to historic events are minimal for my taste and not too detailed – part of scenery, I'd say.

The story had a couple of peak moments when my eyes were practically glued to ipad screen – the first poisoning, the second mudslide, the vengeance – but other than that, a page-flipper at fast pace.

The book reminded me a bit Keiji Nakazawa's historic masterpiece Barefoot Gen – I read the whole 10 volumes of the A-bomb saga – it has the same minimal approach to certain events in the story and quite a bit of gore drawings. But what is expected of a real Hiroshima survivor – and what he is repected for – has nothing to do with a certain Sr. Hernandez from Cali, USA.

My final score – while a quick 60-minutes read, good drawings and all, the book is forgettable for my taste – save for one thing. The blue worm poisoning (seems to be the invention of Hernandez mind – though some symptoms have clear correlation with those of elephantiasis). The blue worm poisoning! Man, that was creepy! Hope I won't see that at night, shivering in my bed at 4am in the morning. That I would be glad to compare to Tezuka's Kirihito, which equals one of the highest degrees of praise for a comic book in my universe. That alone a good reason to read it. Scary and sick!

Love from the Shadows by Gilbert Hernandez 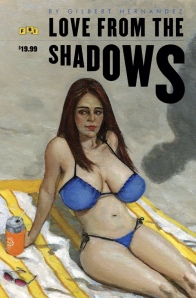 Now, I’ve never ever read Hernandez before – and I thought – well, I should. So why not start with his latest 2011 book, huh? Ummm, not.

While it’s barely an hour’s read for the mere 120 pages and little text, by god, this hour keeps you guessing – should I continue? The plot is impossible to convey – here’s what the publisher says:

The third in Gilbert Hernandez’s line of original hardcovers featuring Love and Rockets’ “Fritz” in her guise as a Z-movie actress (the first two were Chance in Hell and The Troublemakers) is a trippy thriller that stars Fritz in no fewer than three roles.

A beautiful waitress (Fritz, of course) and her hospital nurse brother (also Fritz) visit their estranged father, a once successful but now retired writer (amazingly enough, also Fritz), in order to find out the true reason why their mother committed suicide. When dad’s health fails, the siblings are then more concerned with the money he might leave them.

The story weaves in and out of reality and hallucination and possibly back in forth in time, and to complicate things further, the sister is sexually obsessed with a mysterious man throughout the tale — or is it her brother (at one point posing as his sister so that he might gain his and her inheritance) that is so hot and bothered by this mystery stud? And that’s only the tip of the iceberg. There’s also a venture into ghost territory, with frauds bilking the gullible and Fritz’s character(s) right in the middle.

To complete the pulp gestalt, the book’s cover illustration is a painting by Pulp Fiction artist Steven Martinez (he painted the portrait of Marsellus Wallace’s wife Mia Wallace [Uma Thurman] that hangs in their house and which Vincent Vega [John Travolta] scrutinizes while he waits for Mia). 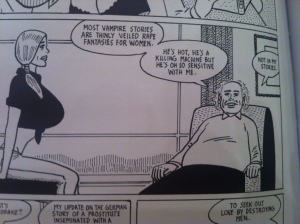 Now, the memorable quote from this book is, of course, the vampire passage here – can’t help but agree 😉

What I don’t agree upon, though, is the statement above that the book’s “pulp gestalt” gets completed by an innocent cover painting (nothing to do with the book, save, well, for the bra size) – the “pulp gestalt” is a sex scene followed by execution of a guy by bow and arrows that would have probably left both Mishima and Pat Bateman in a state of frenzy – Mishima-wise, San Sebastian’s classic paintings are not even close – pages 110 to 115, to be precise. I would want to add “enjoy”, but something tells me I shouldn’t. To avoid necessity of cautionary disclaimers, I guess I’ll post the least harmful page – the rest (before and after), I leave to your (sick?) imagination. 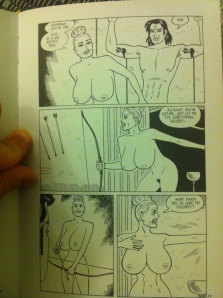