Saga of the Swamp Thing by Alan Moore

Xmas sale on comiXology hooked me up with Alan Moore's iconic Swamp Thing saga that I've never read.
Proves one thing right, the thing one can be certain about Moore's comic book universe – you can't just read his stuff flipping through the pages and running down the storyline at the speed of light – oh no, he requires you to crack them, read every word, suffer through it in a sense. From Hell is the best example of a great but difficult to read masterpiece of his.
A funny observation for trash movie fans – for a person unfamiliar with the Swamp Thing character, I do have to admit that Troma's no less iconic Toxic Avenger looks kinda like him.
All in all, that's another Moore's superhero novel like Watchmen or V for Vendetta (actually, written well ahead of both) that doesn't have a chewing gum effect at all – vice versa, you dig your teeth in and you work it, like you would with a proper rib eye – and unless you have bloody gums or heartburn, you should like it.

From Hell by Alan Moore and Eddie Campbell 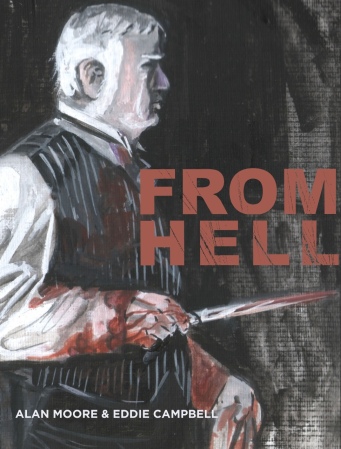 It took me about 2 or 3 years or so to decide that I have to read Alan Moore's From Hell and buy it. Well, my original deliberation was largely due to the fact that I disliked the film based upon it. And then another 2 years or so to actually read it – well, after I've bought it again on ComiXology for iPad.

It is a grand read. Complex and difficult at the beginning, but drawing you in and growing pace once you've dived in. Jack The Ripper story linked with the Queen, with a mix of history and the Freemasons. Absolutely grand. Now forms part of my Moore's must-read list of three – Watchmen as the crown jewel, V for Vendetta and this. No doubt, Moore's ability to spin the story is amazing – you find new angles and links all the time.

Given the ugliness of the Whitechapel murders, Eddie Campbell's raw colorless drawings fit the story perfectly.One big recommendation though – reading it in e-version and not paper is essential. Lots of smallish fonts which are much easier to follow in guided panel view than on a page.

In summary, a masterpiece. I even want to revisit the movie.