The Gun Seller by Hugh Laurie 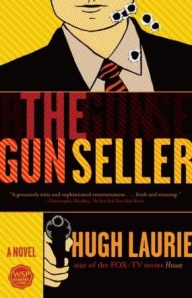 The Gun Seller is absolute fun to read – it’s shame that Laurie spends most of his time doing this boring “i-am-a-man-with-a-walking-stick-who-treats-unthinkable-maladies” series now and has no time for new novels. This is a story of a modern James Bond, who’s not on her majesty’s secret service – and who’s full of spite and cynicism. CIA are the bad guys, greedy businessmen are the bad guys – quite in line with the modern “eat-capitalist” banner. Well, at least not to the extreme. The plot is full of action, though the very end is worthy of a B-category action movie – no budget for here comes apocalypse scenes, so it’s a both unbelievable and cut raw.

In a nutshell – it is a story of a former army man (Englishman, to be precise) being pushed by rogue CIA elements to stage a real life terrorist attack which would enable one greedy gun seller with a middle-eastern name (or wasn’t it?) to promote his new anti-terrorist helicopter – and no ad can do it better than CNN’s breaking news coverage.

Other than the very end – well, only the last chapter, really – it is a gripping piece of literature. Fun enough for me not to try and read anything but this book on every single opportunity. Decided to post a couple of quotes – but it’s full of quotes, it can be subtitled “the book of fun quotes” – so I gave up choosing them fast.

“But me, I’m just not made that way. Different mould altogether. The only good thing I’ve ever noticed about money, the only positive aspect of an otherwise pretty vulgar commodity, is that you can use it to buy things. And things, on the whole, I do quite like.”

“We were heading south down Park Lane in a light-blue Lincoln Diplomat, chosen from thirty identical ones in the embassy car park. It seemed to me a trifle obvious for diplomats to use a car called a Diplomat, but maybe Americans like those sort of signposts. For all I know, the average American insurance salesman drives around in something called a Chevrolet Insurance Salesman. I suppose it’s one less decision in a man’s life.”

“But then of course, for most Germans,Prague is only a few hours away by fast tank, so it’s hardly surprising that they treat the place like the end of their garden.”