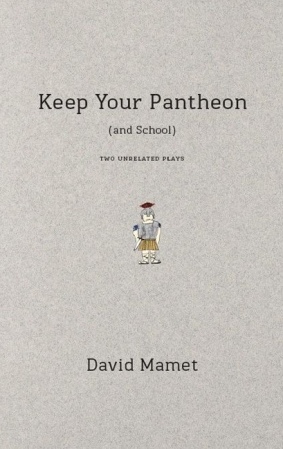 You have to agree – the title is a smart-ass pun of words, huh?

Keep Your Pantheon is Mamet's 2008 play about a troupe of poor Roman actors struggling to make a buck (well, a few hundred sesterces) and keep not even their pants – their heads on.

Frankly, as much as I like Mamet (by all means, the man is a great playwright), while the book is quite readable (and, god is merciful, short: just 70 pages), it's just not as much fun as, say, Glengarry Glen Ross or Oleanna or even more recent Race.

It is witty and it is about ancient Rome, a very trendy topic recently, but not something I could relate to in full. It probably had something to do with the fact that I view Mamet as a quite contemporary author, and all his attempts at pre-XXth century settings are not exactly my favorites, movies inclusive – take The Winslow Boy, for example – weak.

School is way too short – plus it lacks a meaningful story for me to like it – thought it had a funny quote for me to steal.

B: No, we “won” the war. Though, while not debatable, it is ironic. That the cars we drive. Are made by the nations we obliterated. That's ironic.

One Comment on “Keep Your Pantheon (and School): Two Unrelated Plays by David Mamet”