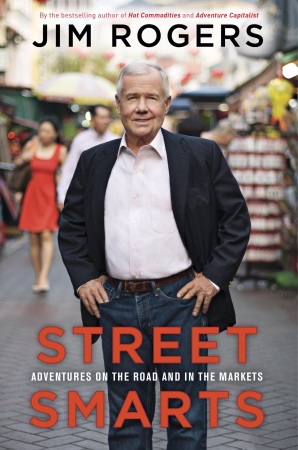 Loved it. Thoughtful, full of life and market insight, and good humor. I haven't read Rogers' previous books – maybe I will now – but for me, apart from the free markets libertarian background (most quite in line with Ron Paul, I would say), it made me think about children.

Rogers' bold move of moving his family to Singapore and putting his daughters to study Mandarin practically from birth makes you think whether English classes for your two year old are enough. Shall I put my children to study Mandarin as well? Hm.

Another thing – as a true value investor, he keeps thinking of how to invest in Myanmar and North Korea. In that discussion, he mentions Cuban real estate in a short paragraph. Given my well known love for La Isla de Libertad, and my bet that they will let the US in this or next decade latest, should I buy a piso or casa there? Puzzled and thinking. Hm.

When governments run out of money, they do not stop spending. It was no different two thousand years ago than it is today. Politicians know no bounds. If Rome was running out of silver, if its economy was being mismanaged and it was running trade deficits, the only way to keep the good times rolling was to create more money. Think of Ben Bernanke in a toga. Adulterate the coinage, crank up the printing press – only the technology changes. Governments keep running out of money, and as long as that happens, bureaucrats and politicians will keep coming up with ways to create it.

“Those who would give up essential liberty to purchase a little temporary safety”, said Benjamin Franklin, “deserve neither liberty nor safety.”