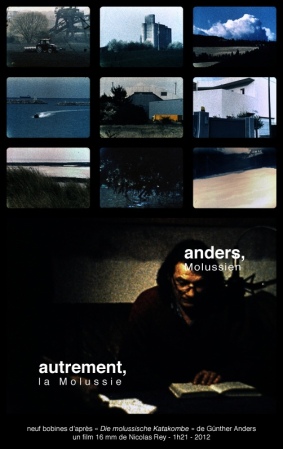 This is a post about a book that I have not read. About a movie the director of which made it on the back of the book which he himself had not read. Die Molussische Katakombe by Gunther Anders. Written in the 1930s in Hitler's Germany, it managed to escaped the purge – and was first published in the 1990s, the year Anders died. In German. No Russian, English, Spanish translations I could find. Damn.

Rather than writing about this tiny 16mm film gem myself, here's a link to director Nicholas Rey website and his interview about the movie. Or read Cinema Scope essay about it.

How do I get a Russian or English translation? Puzzled.

“Shortly before the Burrusian revolution,” Olo explained, “the impoverished young bourgeois of Molussia and the most miserable of the pariah, who hadn't had a job in years, took off because they had Burru's explicit authorisation to find his enemies, beat them, and kill them. But while they felt a general hatred, none of them would have been able to explain why this or that particular man should be their enemy.But when they started beating, their hatred became more definite. No one can beat someone without screaming. While they were beating them up they called their victims the most terrible names. They called them murderers, thieves, usurers, whatever came to their minds. As soon as the names passed their lips, they started to believe them. They continued the beatings because it were murderers, thieves, and usurers which they brutalized. But their hatred became even more definite when the victims fought back. Because when two parties fight each other, enmity is beyond all doubt. After Burru had allowed his people ten bloody days there was no need for a revolution anymore. Because his enemies now were theirs. 'In combat,' one of Burru's secret edicts reads, 'one recognises enmity, enmity comes in killing.' Learn that.”

“As what am I supposed to learn it?”, asked Yegussa.

“As the most profound wisdom of wickedness,” answered Olo.